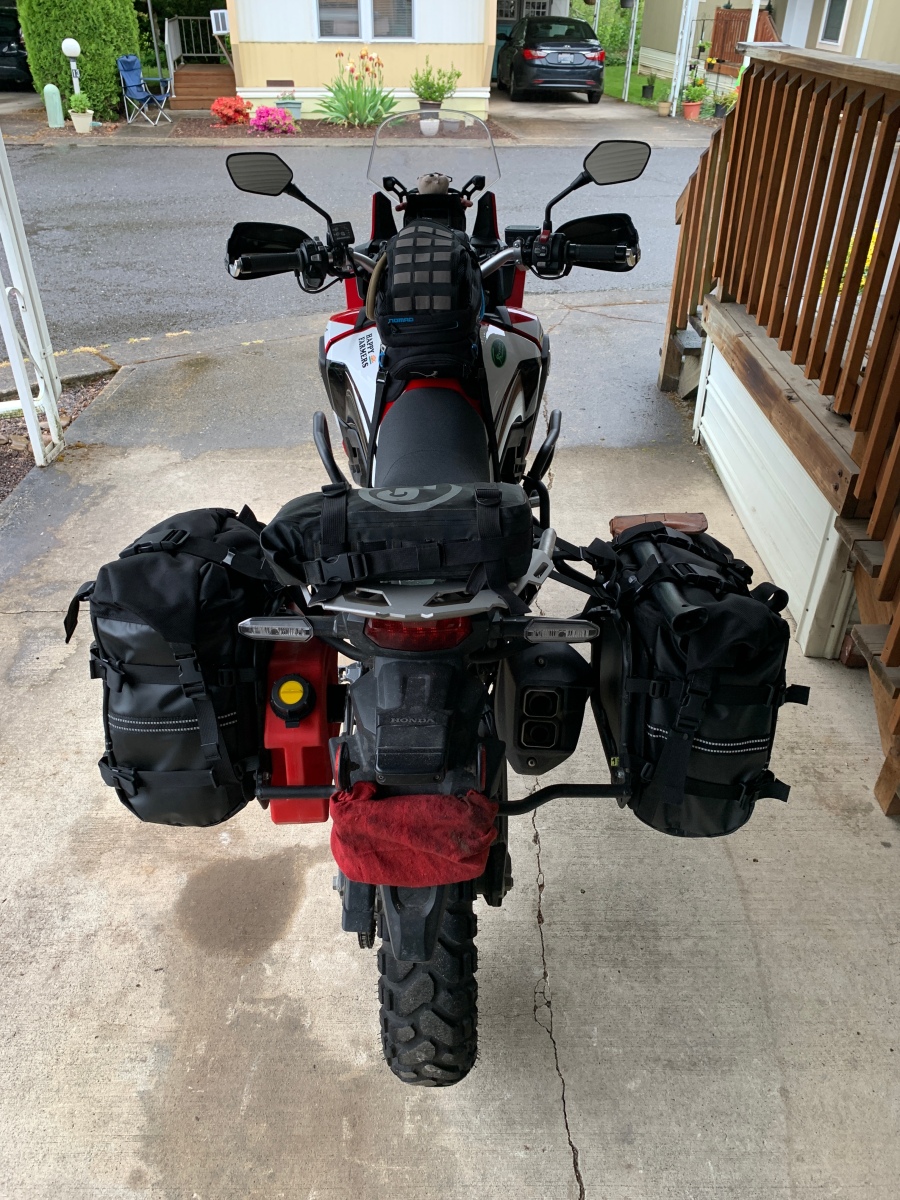 So, the weather is getting nice here soon, I’ve got some free time from work and I really want to head out into the desert and rally this thing around and see what it can do with a load. Wednesday, I’m heading into the boonies for 5 days with no other agenda than to putz around and look at cool stuff in the sticks.

This will be the first multi day camping trip with the new bike and It’ll be interesting to see how it compares to the KLR. It’s definitely heavier, by about 70# fully loaded, but has over twice the power and carries the weight much lower. That 6 gallon tank was nice for range, but it was up HIGH.

Taz being a modern bike also helps, what with the electronics and ride settings, traction control, ABS – none of that shit on a KLR. Not to mention brakes that stop you, what a thing! I’ve had to do a couple full emergency stops on this thing and the dual front rotors slow shit up in a hurry while being moderated by the ABS, it’s crazy how effective this stuff is.

I generally pack pretty light as I have spent my time carrying heavy shit and no longer care to and have nice lightweight kit for backpacking and the like. The Wolfman saddle bags are really roomy, jammed a ton of stuff in them. Decided to bring a full 1G Rotapax and gallon of water in a MSR Dromedary in the bottom of the opposite pannier to try and balance the weight laterally.

My travel emergency kit is in the Giant Loop bag strapped to the tail rack. My tool kit is under the passenger seat and I have a ton of little shit in the stock “tool box”. Think I have the weight fairly well balanced, now it will be figuring how to balance the weigh, size, and power together to master riding this thing.

I know it’s not trying to muscle manage it. The most instructive thing I got out of the Touratech Rally last year was watching a demo ride that Saturday night in which a part was this 115# woman riding a brand new BMW GS 1250 Adventure and making it her bitch. Then another similarly sized gal did the same thing and that taught me it is finesse and understanding the weight, balance, and power and how they interact that will get you to master a bike. They aren’t muscling those bike round, but have total control. It was impressive and instructive.

This is the namesake and mascot of the new bike. This particular Taz was given to me by my niece and nephew 25ish years ago as a mascot for my poor Subies I drove all over the west on big road trips. I figure it was appropriate as I’m loud, obnoxious, and no one ever understands what the fuck it is I’m trying to say anyway, soooo… there ya go.

Thankfully, I found a solution to the Hatchet problem. That and a little folding saw should do just fine.

The Great Basin desert is my favorite region in the whole wide world. It’s so big, diverse, and alive. So much going on in the desert if you have patience and pay attention. It’s a subtle landscape.

Guess I’ll post another of these here in a week or so with some cool shots from the boonies.