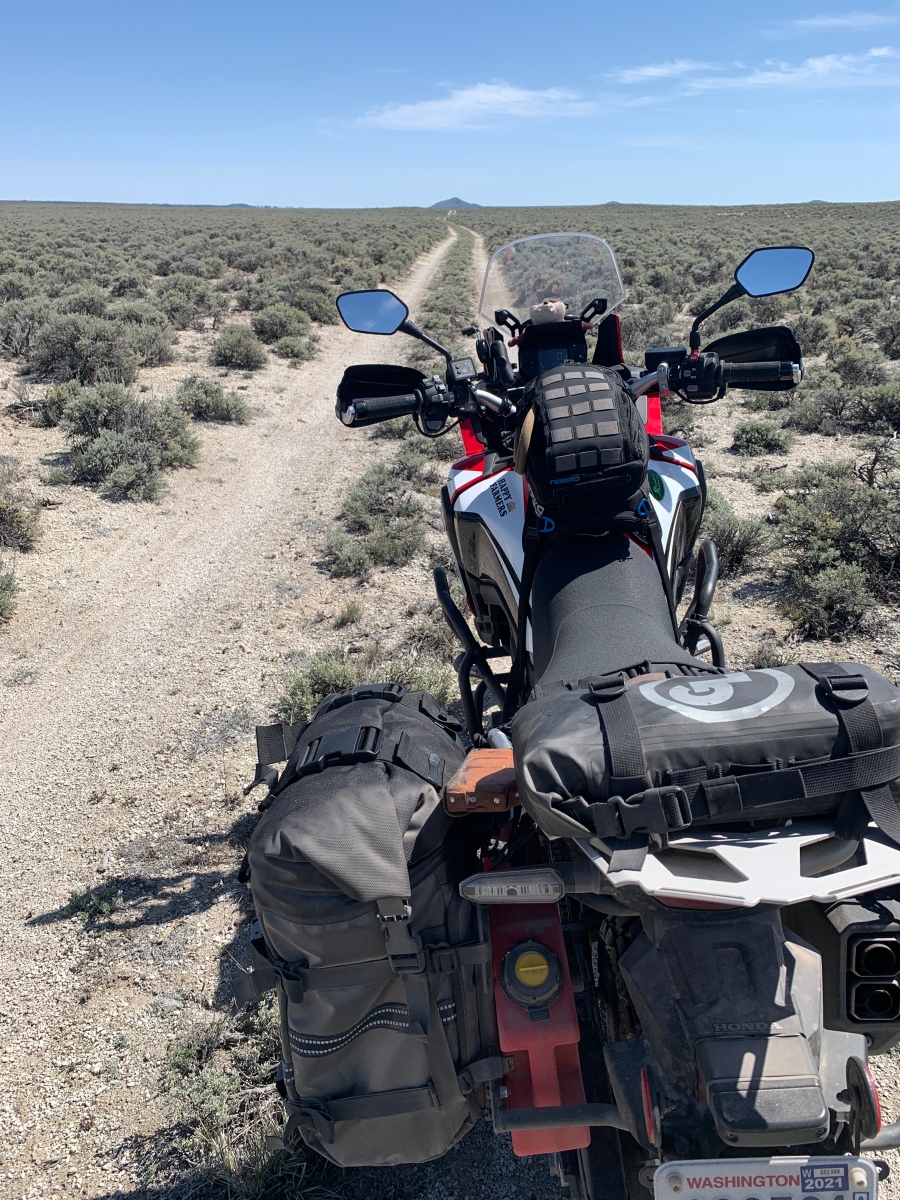 I just can’t express how stoked I am to have found motorcycles for exploring the world. Absolutely everything about it is right up my alley, even the sucky shit. No one remembers the trip that was both trouble free and exciting, because those 2 things don’t exist together unless you think ketchup is spicy.

It’s the suck, the heat/cold/fucking goddamn wind/fucking goddamn gravel/ fucking goddamn log trucks, that one look up that shows you a sky too big to be real, meeting a lifelong friend at a gas station in the middle of Outer Bumfuckistan, getting a hot cup of coffee at a rest stop after 100 miles in the driving rain, meditating in motion, when there is nothing left to think about and you’re just an input organ, absorbing the landscape as you move through it.

And it’s fucking tough! Riding a bike that weighs 575 lbs when fully loaded into the sticks on shit roads for long periods of time will toughen your lazy ass up. I missed the discipline solo riding enforces and enjoy the challenges. My gig is sweet, but physical challenge-wise it’s nothing like 20 years in wildland fire. Few things are, really. Falling big fucking hazard trees with no room for error, praying to a god you don’t believe that the top doesn’t come down on your head. Running lead saw on an initial attack, initiating a burnout of epic scale to stop a fire of unimaginable size from swallowing a town whole! Holy shit, nostalgia moment!

Aside from getting paid to shoot at folks and be shot back at, I can’t think of a more exhilarating career field that running around the burning forest/range and playing with fire, chainsaws, veri-pistols, quads, dozers, helicopters, retardant planes, engines, the whole hoot. Nature isn’t shooting at you, but there are a zillion ways to die in the woods, getting burned up is the least of your problems. Until it isn’t.

So, now that I don’t do that anymore, along with a few hobbies like ice climbing and mountaineering which I still do, but on the super chill side, there was a lack of that thing that gets me into a Flow state, having to focus on something so totally brings the good Flow. The little things and moments count. It feels good to move across the landscape and truly appreciate it, despite challenges. One good view can erase days of fucked up mess. It’s really focusing at 140 mph, but I don’t get to do that much. Yet.

I guess I like it because it’s earned, you don’t buy a ton of shit and go out and instantly become competent, you can’t totally buy yourself into being a good rider. None of that cool shit matters without skill, lying to yourself will just get you in trouble. I’ve met plenty complete failures as men with sweet gear.

Darwin Awards exist for a reason.

So, I was just feeling it, so blasted that big wad of blabber at you before going over the shakedown ride last week and the upcoming Memorial Weekish Desert Romp I’m heading out on this Thursday. That stuff is what’s next, dear reader. As in singular, I appreciate you. It keeps this from me just babbling at the voices in my head and for some reason, that’s important.

Finally getting Taz out for a shakedown run in the desert was a hoot and reinforced the mods, adjustments, and goodies gotten for the beast. Got to test the suspension with a load at stock settings on the very back way to Bend, then cranked things up in Bend before diving deep into the boonies.

The first night was supposed to be in the woods, but timing and weather lead to a last minute text to my awesome niece and her husband in Bend for spare room privileges. Since I’m a good uncle, I got to hang with my favorite person in the world and her hubby (who is pretty cool himself) and sleep in a warm house. I didn’t go the kid route, but if I did I would want her to be just like my niece. Not the same with the nephew, but I won’t get into that here.

If you’ve never ridden the loamy, sandy volcanic soil in Central Oregon, it’s akin to dry sticky sand, kind of. It’s it own thing, really, but it keeps you on your toes. The degraded cinder roads are sweet, too. One moment of fucking off and you’re in an 8″ deep moon-dust hole fighting for your life, as friend B-Rad found out on a trip a few years ago. Thankfully, rider and bike were fine.

I bombed around down unexplored roads after getting past the forest and ended up finding a sweet camp spot right on the edge of the forest, wanted to avoid the damn wind so common out there. There was a bonus recently fallen old grayback snag with a ton of nicely broken up dry large limbs conveniently scattered all over the place. A good campfire was had.

Got a full moon that night so I tried to get a decent shot with my iPhone before it ate shit. Turns out the camera in an X does NOT like riding in a Ram-X mount. It now makes some funky assed buzzing noises and can’t focus for shit.

Having had a full day of each suspension set up it was evident how much better it handled cranked up. Duh. I wanted to see if I could feel a difference and get an understanding of what that meant. And now I know.

The rest of the trip took me on a meandering route that passed through Shaniko (twice), Antelope, Heppner, Dufur, John Day, Condon, Ukiah, Seneca, Izee, Ione and Hood River on the way out and back for coffee and gas. Spent a couple nights along tributaries of the Deschutes on little chunks of BLM land typically busy with rafters.

All in all, the set up is good to go, a few adjustments here and there.

The orange line is the, very rough, route. Clocks in at a little over 1k miles in that rough format, so I’m thinking close to 13-1500 miles. Heading off to Bend tomorrow for another niece visit, then to Klamath Falls by a very indirect route by Saturday. Visiting friends for a couple days, then off to Gerber Reservoir, Hart Mountain Hot Springs and Tuesday I plan to be on the Alvord desert to camp and fuck about with some brain candy. You’re welcome to join, but you’ll need your own gear. After that it’s off to Rome, then up that weird isolated strip between the Owyhee River Canyon and Idaho border. Crazy aerial imagery of the area, looks tough, but cool. We shall see.

Wanna check out Baker City at some point, along with Sumpter, then roll into the homestead Saturday next.

Alright, a cool song just came on so it’s time for a living room dance party.

Almost forgot, since we’re all trying to support local businesses and such, please check out, then buy, this super sweet critter art from Whatif Creations made in PDX by my pal Jessie.