After the initial first day clusterfuck start typical of such an undertaking, things have rolled along smoothly. Not that day 1 was terrible, just a too long day ending at a poor camping spot due to the damn sun going down. Actually saw some sweet country and got to ride some sketch Forest Service roads to get the whole thing kicked off.

The rest of week one saw me roll through some of the most beautiful scenery I’ve seen. NE Oregon and eastern Washington are places that have passed me by as destinations to explore up to this point. So glad I chose to run through the area on this trip, it did not disappoint. From the Painted Hills, Ponderosa stands in huge meadows to dense mixed conifer west-side style forest, it was all there. Plus plenty standard desert. Well, except in WA. They seem to have whacked most of the native sage steppe and replaced it with a metric shitton of dry-land wheat. As in as far as the eye can see Kansas cornfield style. 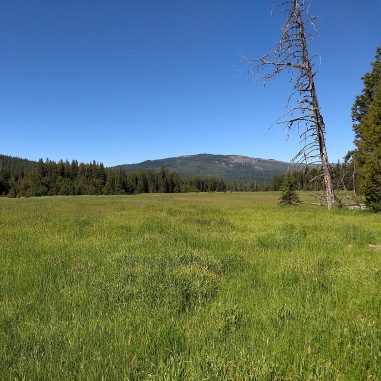 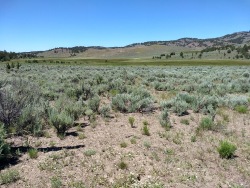 I knew there was some, but not that much. Didn’t take away from the reason I went that way in the first place: Palouse Falls and Dry Falls. Remnants of the Missoula Floods, or if you are into emerging hypotheses, an astroidal impact on the North American and European ice sheets which may have kicked off the Younger Dryas ice age, these features are massive and impressive. Trying to imagine kilometer high walls of water full of huge boulders stripped from the very bedrock and washing over the terrain leaving behind such features as an after effect is truly mind blowing. 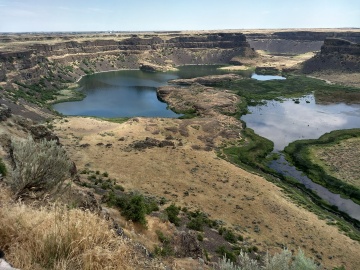 Much of the first week was on dirt and gravel USFS and county roads with a few stretches of pavement on little remote ‘highways’ and 25 miles on I-84 to connect it all up. Rolled through a postage stamp sized community called Troy on the OR/WA border deep in the Grande Ronde river canyon then lots of twisty dirt to a sweet camp spot ruined by a good ol’ boy hauling water in a semi all night long in the sticks running his Jake brake. Fucker.

Hit Winthrop, WA where I worked my first season back in fire in 2011 after my massage business collapse with the economy and finding decent work hard to come by. Crowded as hell, but still beautiful and found an old camping site with a creek and good hike far from the masses. 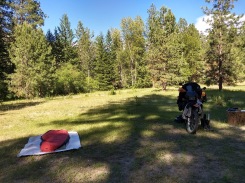 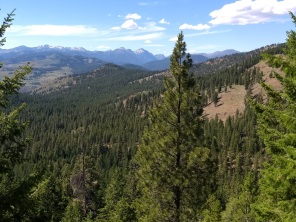 On to Republic WA to spend a day with friends from the USFS in Bend and got in another sweet day swimming to help keep the oppressive heat and road stench from getting bad. So far on this trek I’ve gone swimming more times than in the previous 2 years and it’s all been a hoot. Good to see dear old friends and their kids, share some stories and just hang out.

Returned to my favourite (see what I did there?) country on the planet to visit friends Mike and Dale (and bonus friend Katie who was also visiting) in Revelstoke, one of the most beautiful spots for a town you can imagine. Showed up a day earlier than planned to be able to hit up Skydive Salmon Arm to celebrate the 150th Canada Day by hucking out of a Cessna 182 at 10k feet with buddy Rob strapped to my back. Skydiving is one of those “gonna do” things I’ve always imagined I’d get to. The time came and it was all I could hope for. Going to have to go a few more times to see if it’ll be the next activity to pursue since ice climbing isn’t really a thing in Oregon.

Mike has been at it for a while so he was jumping for fun, the girls had each done a tandem so opted for the First Jump course which has you control your own chute and land yourself. Wanting to do it, but get in freefall, the tandem seemed a good starting place and was soooooo worth it. Canada Day was the best day I’ve had in a long time combining the jump, good food, swimming, a sweet small town fireworks display, and awesome friends to do it all with. 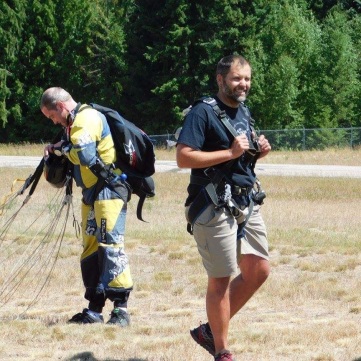 Finished up my time in Revie playing cribbage, spending a day on the Columbia swimming and kicking it, watching Letterkenny (a Canadian show that is one of the funniest things you’ll ever see) and generally enjoying time spent in the company of friends. You may notice a theme with my visits. After a year and a half in Silicon Valley practically friendless, it was time to be among my people and I’m getting my money’s worth on this trek.

Currently I’m in Calgary tapping this out at friends B-Rad and Beckie’s place. Oh, and Neve, Jane and Emma the Wonder Schnauzer.  The run over Roger’s Pass was stunning, but hard to pay attention to as the road was packed with less than skilled drivers. Parks Canada made all federal parks free for the 150th celebration this year so the woods are packed with tourons. Did get to see a smoking semi trailer full of meat that had caught fire and some other nifty stuff, however.

This trip has been a blast and is as I had hoped, plenty new beautiful sights seen and time with well loved friends. Kicking it here to visit folks and get in some local playing before heading out to Yellowknife, NWT the 16th. Plan to post again before, then after, that run. Then east……….

For The Moto Nerds

So, the KLR has taken everything I’ve thrown at it without complaint. Well, excepting running really low on gas yesterday and clogging up my fuel intake. Acted like it was out of gas with a 3/4 tank after filling up so I fussed with the switch and got it to take fuel down the reserve tube, but I’ll have to pull the thing and clean it tomorrow. That was the only hitch, nothing mechanical, just thumping along.

The Giant Loop Great Basin Saddlebag has been good for the most part, but is a little awkward for such a trek. Not a bad item, just difficult to access some of my kit the way it needs to be packed. It’s a small complaint for a great piece of gear as I’ve got my system down well enough. The Fandango Pro Tank Bag is awesome, plenty room and not in the way. The down bag, sleeping pad and other goodies I’m testing out for Next Adventure are doing well and a full review of much of my gear will be forthcoming. Figure it’ll help new folks make better gear choices if they can see how they work in real world moto conditions.

My Kenda 761 tires have been doing well considering they are mostly for road and I’ve beaten the shit out of them off road over the last few months. Nearly dead, there was a small leak in the rear I pump up each day for pavement, was fine for dirt. New tires were ordered ahead of time and sent to B-Rad’s so this weekend I’ll be slinging a new set of Shinko 700s on and doing the oil. Used them before and like ’em, we’ll see how they do on the forestry trunk roads heading north. Should be fine.

So far, mine is the only Gen 1 KLR I’ve seen traveling, plenty around for local use. A few Gen 2, plenty BMWs/Tigers/V-Stroms and a smattering of Africa Twins and KTMs. HDs, lots of HDs, holy Christ.

Feel free to ask questions about route, gear, conditions. If I’m going to be in your neck of the woods and you wanna grab a cup of joe and bullshit, I’m game as well. It’s all about the folks you meet on a trek like this.

2 thoughts on “A Good Start”